We’ve launched a podcast! Unfortunately, we cannot record it in English. But we have translated some quotes for you. The title of the podcast (FemkyLive) refers to the format of its recording. We call the guests in a private chat where other local feminists can join the conversation. Then we publish the recording of the conversation on our Patreon free for everyone!

In the first episode, Edward Reese talks about the changes in his life since we have last interviewed him, gender transition while being nonbinary, and how it is happening in Ukraine. Enjoy!

“In our interview, we talked about me preparing a theatrical project about my experience of domestic violence. However, it just so happens that I attended the first consultation on gender transition in preparation for it. For many years I have been very eager to take certain steps in this direction. I did not have such an opportunity before when I was in an abusive relationship. Now I still do not have the money for it, but I can’t wait anymore. In Ukraine, trans people are obliged to receive a psychiatric diagnosis. When I started attending Pavlov Hospital for consultations, I was so impressed by this place that I somehow forgot about the play on domestic violence. Instead, I will create a performative exhibition on transness and psychiatry.”

“When people talk about trans people, they speak primarily about operations and the practices they see in films. These movies are usually about trans women because they are more visible. Some people do not understand how an actual trans person lives, not a positively or negatively mythologized one. It is almost unknown what is transitioning like for trans men and nonbinary people. So I want to document my experience. I hope that Ukraine will implement ICD-11 next year, according to which transness is not a psychiatric illness. If this happens, trans people will need only to visit a psychotherapist and sexologist.”

“I was generally treated okay at the psychiatric hospital. Nevertheless, I got a letter from a guy who also had been attending it, and he was mocked, bullied, and questioned about his transness. I think this was because he is, first of all, significantly younger than me, and secondly, he is not an activist, nor does he work for an LGBTQ+ organization. So my experience, while being traumatic and scary, is far from the worst thing about this topic. I have an opportunity to make an exhibition and talk about transitioning to a large audience on TikTok, but it’s much harder for other people. I’m doing it partly to get people to start talking about it as there are not so many people who do that.”

“I am a nonbinary person. But for our medicine, nonbinary and queer people don’t exist at all. I’m going through FTM transition because it is the only option. I was scared that a psychiatrist would find me online, look at my pictures, find out how I identify myself. I had to wear the most masculine clothes I had. I stopped shaving my facial hair and using makeup, doing everything to be trusted at that period even though I don’t do that in real life. It was also scary when the nurse questioned me about the meaning of my tattoos and how I got the bruise on my arm (from a blood test I had taken from another nurse at the same hospital). It seemed like she might find some other disorder in me and slow down my transition.”

“I talked to a Norwegian psychotherapist who is a trans person herself, and she told me that they started implementing the ICD-11 principles a few years ago. There, too, trans people have to treat some severe disorders if they have them, but it’s not like in Ukraine, “heal the depression, and then we’ll let you do a gender transition”. In Norway, people can do it simultaneously so that at least they don’t get worse because of what society thinks about them. I was also attending training for trans activists in Stockholm, during which we visited a gender clinic. This is a special clinic that works exclusively with trans and nonbinary people. There I saw for the first time that people could make a non-binary transition, even though at the time there was no option to get papers with a third gender marker in Sweden. They have choices where you get fewer hormones, and this way, you are going through the level of transition you want. There are no standard schemes for everyone. Now I recall this clinic when I go to Pavlov Hospital, and I feel like it’s two different planets.”

We want to keep making and translating the podcast, so we need your support! Join us on Patreon! 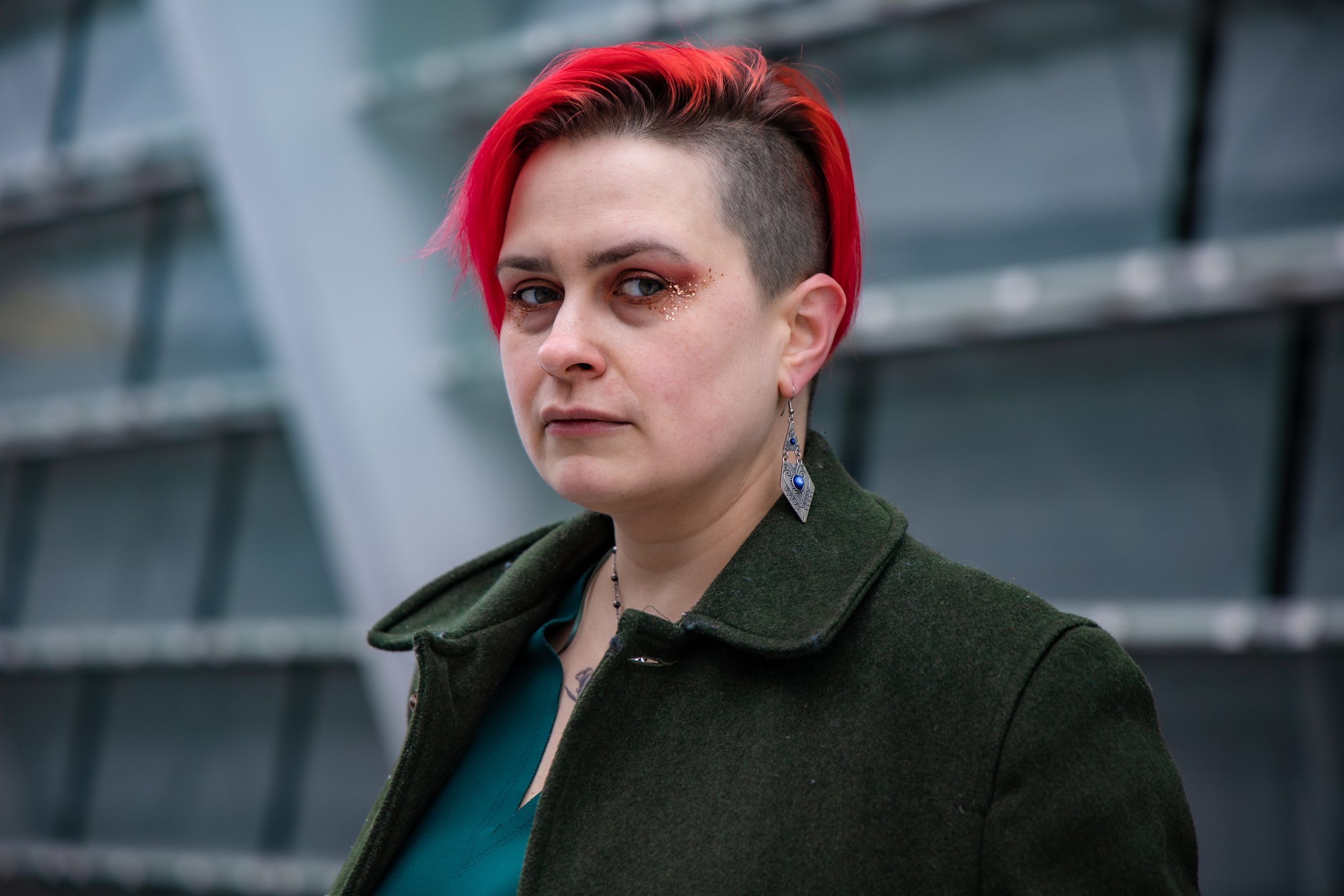 On being nonbinary, TikTok and performance about abuse