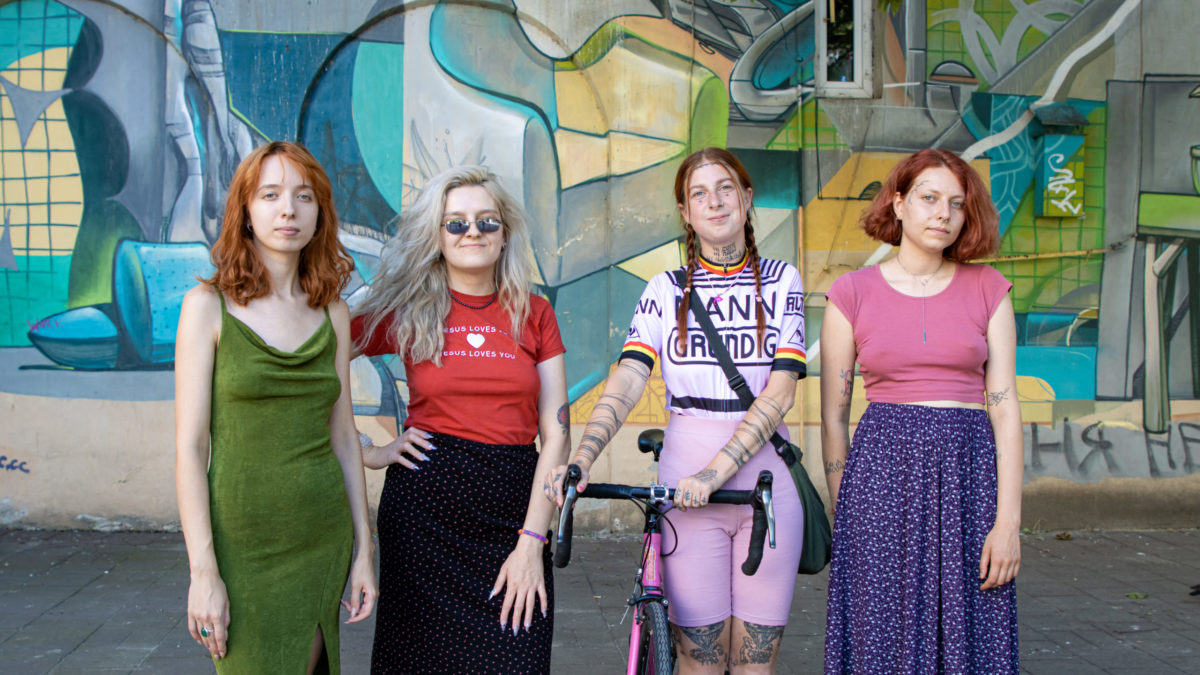 Bilkis is a grassroots intersectional feminist initiative that adheres to the anti-capitalist agenda. After the beginning of the full-scale russian invasion in Ukraine, they relocated to Lviv and adjusted their activities to the humanitarian needs of women and LGBTQ+ people. You can support Bilkis using these requisites.

Yevheniia: Yana and I studied at the university and lived together in a dormitory. At that time, I was immersed in the topic of feminism as I saw in it the answer to my problem — an eating disorder. Then I realised how important feminism is politically. We observed how things were going in Kharkiv and exchanged our thoughts, and views. There was only one organisation in the city that covered the topic of women’s rights, and we thought it would be cool to do a grassroots, horizontal, anarchist initiative.

Yana: Then I had already been a feminist for a long time, but I was involved in activism only sporadically. At some point, I realised that I had to do something different, and I shared this idea with Zhenya (Yevheniia). That’s how we created Bilkis. For several years, the two of us have been engaged in online activism, holding street actions dedicated to the topic of gender-based violence. Then we decided to expand and were joined by other members.

Yevheniia: This year in March we planned to hold an interactive lecture for teenage girls (8th-11th grades). Even before February 20, we posted leaflets with invitations around the city. We had been preparing for it for a long time and booked space, but on February 24, a full-scale war began. That morning I woke up to explosions. I asked my partner what those sounds were, he replied that it must be thunder. However, two more rockets flew by and it became clear that it was not thunder. We started packing, I called Yana and offered to go to Poltava together. My father took us there by car. From Poltava, we left for Germany and spent two months there.

Ivanna: I joined Bilkis a little over a year ago. I am from Donetsk region, but I’ve lived in Kharkiv for the last three years. I met the war when I was alone in the apartment. All the bomb shelters marked on the maps of my area were closed and the keys to them were lost. I moved downtown with my friends, and there we shared a bathroom and a hallway. Then I jumped on the evacuation train that was going to Kyiv, but it was extended to Lviv. In recent months, our initiative has done many different humanitarian tasks, in which I’ve been actively involved.

Lisa: I’m from Crimea, but I’ve been living in Kyiv for the past six years. On February 24, I woke up in the apartment where my friend and I lived for six years and saw that she was standing there dressed. She said “it started” and after a few minutes she left, leaving me alone. After that, other friends started calling me, urging me to go, and I started to pack. I went to live with my relatives in the Rivne region for three months, and I had a very difficult time there because they were not ready to live together, especially during the war. At some point, I went to Lviv, met my friends here, and they offered to move in. I joined Bilkis two months ago. Humanitarian aid is currently the main focus of our activity, but we want to get back to educational projects.

Yevheniia: We were constantly in contact with all the participants of our initiative, and we continued to hold meetings and discuss the possibilities of continuing our activities.

Yana: Even before the invasion began, we had applied for a small grant, and in the first days of a full-scale war, they responded that they were ready to provide us with these funds as an emergency. This probably became a catalyst for our humanitarian work.

Ivanna: At first, we provided targeted help, got some requests from relatives and friends, and sent them the necessary things. Then on our social media pages, we shared the message that we were sending humanitarian aid kits.

Yevheniia: This activity became more structured when Yana and I returned to Lviv, got together, and discussed the action plan. But we did not expect that there would be so many requests for help. After the publication, more than a hundred people wrote to us in a few hours. It reached 300-400 messages per day. And although we are no longer accepting new requests, people still reach out to us…

Lisa: Russian aggression continues and the number of requests does not decrease. People are leaving their occupied hometowns, they have no jobs, their children need medicine, and everyone needs food and shelter. And you have to turn all these requests down because you don’t have enough resources to cover them. You read their stories and it tears you apart…

Yana: In cases where evacuation is required, we can still redirect people somewhere, and find the places to stop. But we do not direct requests for humanitarian aid to other initiatives, because their possibilities are also exhausted.

Yevheniia: We spent a lot of money on humanitarian aid, and when the money ran out, we started looking for new opportunities. Then we noticed that all those Western foundations that provided emergency support at the beginning of the invasion were no longer ready to keep on offering it. Now they require us to be officially registered and meet their usual criteria.

Yana: Currently, we are helping using the money from donations and probably will continue to do so in the future. If people keep on donating, we will buy the necessary things and close the requests. I feel exhausted from humanitarian work, I am tired of people who ask us for help, of the fact that it is necessary to coordinate it and to carry heavy boxes. I want to stop doing it because it is unbearable to do it all the time.

Yevheniia: In Kharkiv, we felt that we were building a feminist community. Such a community already exists in Lviv, this way we will concentrate on our projects.

Yana: We now have an office in Lviv, and we decided to allocate one of the rooms for a permanent free market. People can bring their things there that they don’t need or take what they want. I would like in the future for this space to also become a platform for various events dedicated to eco themes.

Yevheniia: The project that I want to host in our space is feminist poetry evening. Once every two weeks, volunteers will gather and talk about their feelings through poetry: their works, or those they like. Since the beginning of the full-scale war, I’ve started to read a lot of Ukrainian poetry. It is difficult for me to express my thoughts in my own words in a conversation with someone, but I can read a poem and understand: this is how I feel.

Lisa: I would like to manage the cultural direction. Many female painters and sculptors lived and worked in Lviv. I would like to create and conduct feminist tours telling people about women artists. I also love cinema and want to hold film screenings about women and for women, including displaced women.

Ivanna: I have a small project that has already started. Together with Yana, I created a cycling club in Lviv. We invite women and nonbinary people on bike rides and ride together. This is something completely new for me, but I’ve been dreaming about it for a long time. I’ve been a solo cyclist all my life, and now I’ve decided it would be cool to build a community open to different groups of people who aren’t cyclists. I am learning to be inclusive and sensitive, and I want to tell people that cycling is not always about competition, so you can just ride and have fun. I enjoy having a sport in my life and I would like to share it with others. In addition, I am a courier for the Lviv Vegan Kitchen. At the beginning of the invasion, I was riding a bicycle to the suburbs of Lviv, and delivering food to the vegans of the Territorial Defence. Now I deliver lunches from them to the Feministychna Maisternia shelter every day.

Yana: If we talk about what kind of help we need, it is, first of all, involvement. I would like feminists from Ukraine to be invited to discussions as experts about their own lives as often as possible. So that they can tell what is happening in Ukraine now and what challenges they are working with, even if they do not know English well or at all.

Yevheniia: We need all the possible attention to Ukraine. Especially to women, queer people, and feminist groups who stayed and keep on working in Ukraine. We need a lot of money, as without it, unfortunately, some things cannot be done within the framework of the capitalist system.

Lisa: We ask people to trust the opinion of Ukrainian feminists and Ukrainian women, and discard some of your liberal, enchanted views about Ukraine and russia. To believe what is happening to us, and maybe even treat it more rationally. Often news about Ukraine is perceived very emotionally by Western communities, but then they offer to “make friends” with the occupiers. People should realise that the problem is not solely with putin, but with the russians.

Yana: Recently, I attended lectures about Rojava and we discussed that now Turkey is starting to escalate the war again. I want countries that have resources, which are often the ones of Western Europe, as they had places to export them from, to pay more attention to all the territories where there are currently some captures or military actions. So that the people living in these countries begin reflecting on the topic of their own colonialism and self-educating on the issues of both the countries of Eastern Europe and the Middle East. 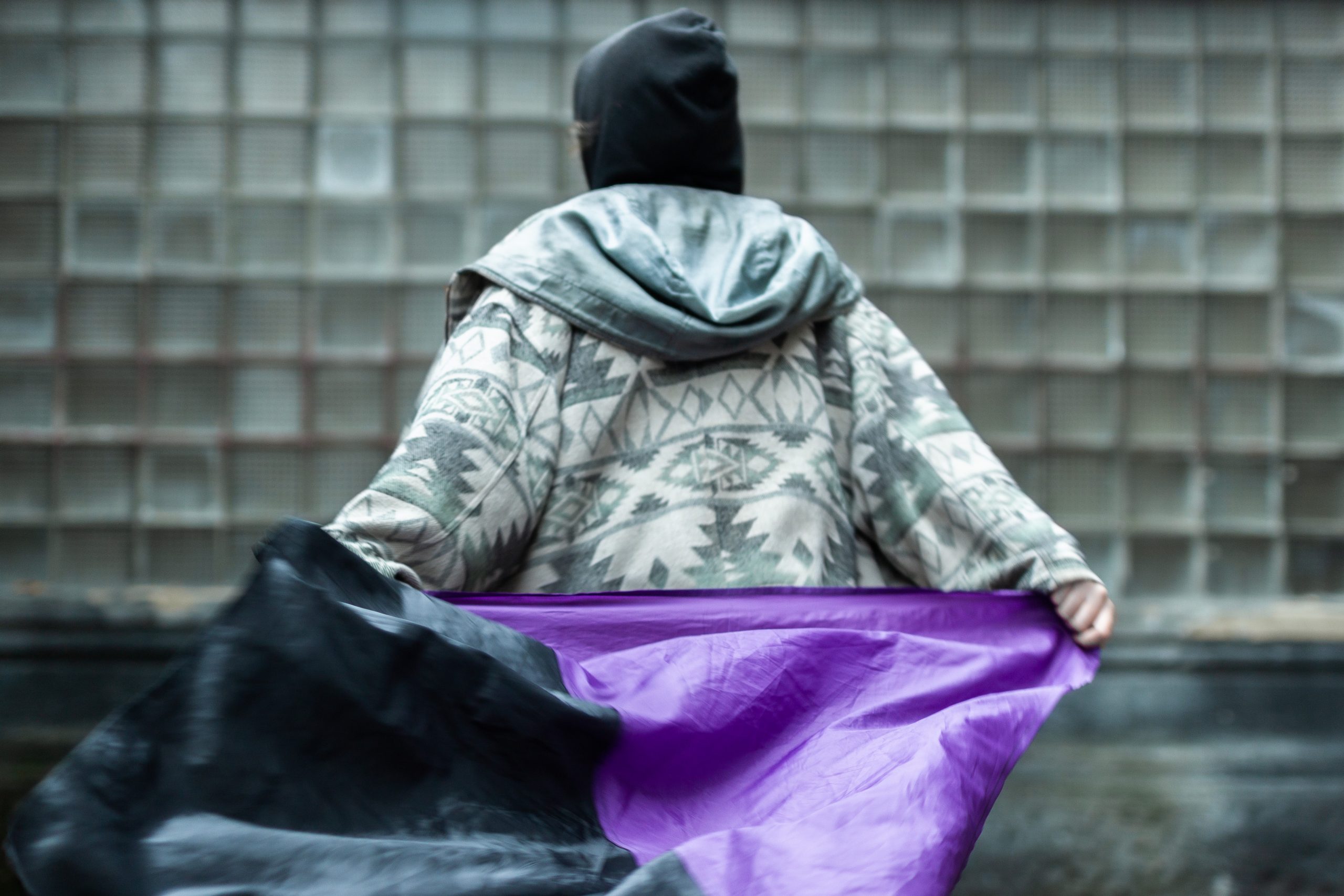