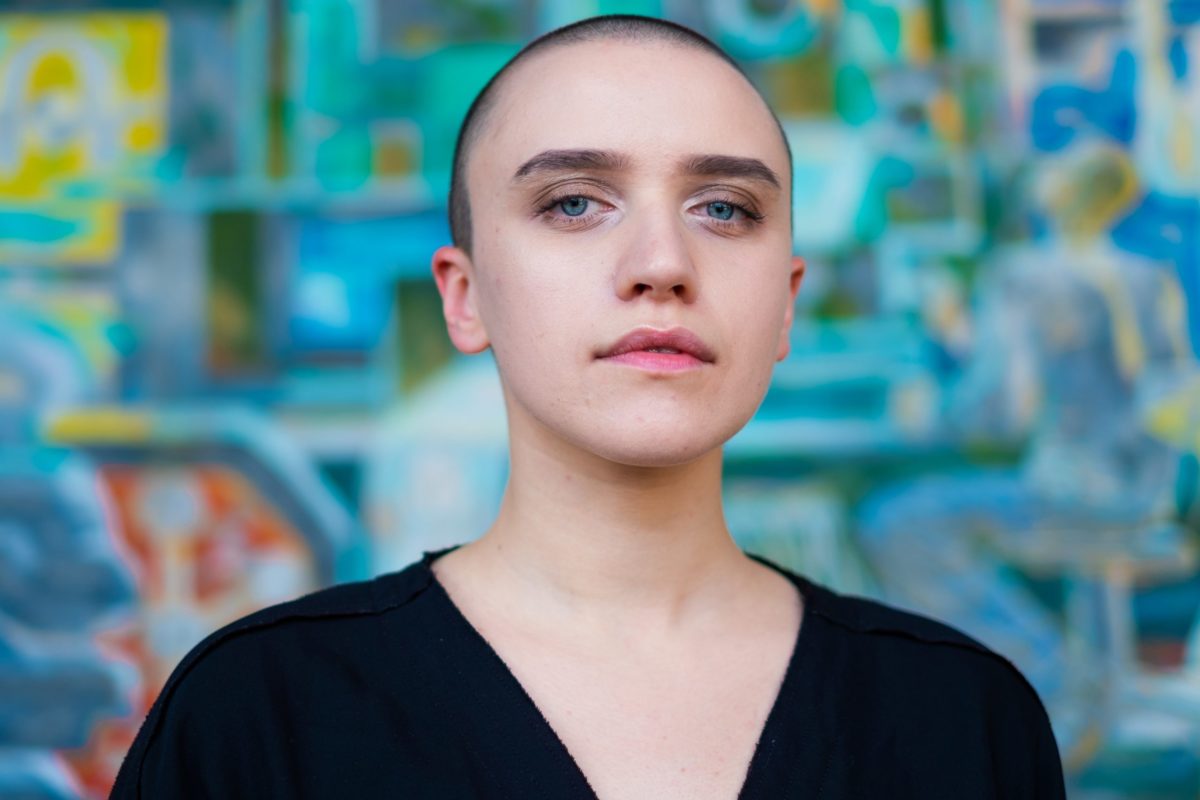 My name is Elmira Musaieva, I’m 23. I come from Dnipropetrovsk region, but I’ve lived in Kyiv for the last six years. At first, I entered the faculty of philology at Dragomanov University. This decision was dictated only by the desire to leave a small town, so soon I left the University. I worked for some time and tried to find my own way.

When I lived in my boyfriend and his mother’s flat, I found the book “Road to the Stars” by Yuri Gagarin. It had a great influence on me. I got excited about this topic and decided to enter the aerospace technology faculty at Kyiv Polytechnic Institute. I had to work hard to pass tests because I had a low level in math and physics before entering. Nevertheless, I was happy to accept the challenges, and I’m happy to be here now.

I love and study socialist modernism. I got carried away by the simple, rhythmic and space influenced forms of architects who created these buildings and the ideas they put into them. It hurts me that this architecture is not respected due to the Soviet heritage desecration. I’m fighting for the conservation of buildings and panels as I can. Fortunately, there is a group of people who also explore and preserve them.

I disagree with the statement that the cosmic cult and space industry existed only for the sake of an arms race. Certainly, the government was interested in it, but people were looking to the future and dreaming about interstellar space exploration. We lack it now. The modern architecture reflects the science and human values decline. However, I hope that the human’s nature and curiosity will keep leading us to outer space. As scientist Tsiolkovsky said: “Mankind will not forever remain on Earth.”

At the same time, I work as a model at Cat-b agency founded by my friends. They were looking for people with an unusual appearance in their surroundings. Right at that time, there was a boom on models with shaved heads. They didn’t have strict requirements: the model shouldn’t obligatory meet perfect size, but of course, it’s desirable.

I participated in a few fashion shows. I work more often in advertisements and music videos. The most impressive from the recent ones are “Mantra” by Bring Me The Horizon and “Light” by San Holo, where I played a vampire and the shooting process was quite extreme: I had to hang over the wall.

“As long as society encourages the cult of beauty, models will be required to have “commercial”, beautiful faces.”

I have to confront stereotypes based on my appearance. For example, I know that I’ll have difficulty to find a job related to my degree because I’m a woman, and on top of it, with a weird appearance. The parent’s attitude is the same: they would like to see me wearing long hair.

I often hear people shouting at me something about it in the street.

I certainly feel that fashion is becoming agender, and I think this is not just a trend. Society is changing, and requests are changing. This process will continue. Fashion is also changing but very slowly. I think that the problem resides in the global way of people’s lives. As long as society encourages the cult of beauty, models will be required to have “commercial”, beautiful faces. While we live in capitalism, brands will keep overproducing stuff several times a year and then burn everything that can’t be sold.

“We hid in the store, hoping that they would leave, but they kept following us.”

Last year I came to the march on International Women’s Day for the first time. Previously I hadn’t known about these marches, but I already had realized and positioned myself as a feminist. There were a lot of people, women and men. I made a bright poster and felt the spirit of solidarity.

After the action, my friend and I decided to go to the mall to eat. On the way, we noticed that we were being followed by a group of 7-8 guys with a characteristic appearance. I recognized one of them: he had torn up a march participant’s poster under the monument to Princess Olga. We hid in the store, hoping that they would leave, but they kept following us. In front of the shopping mall entrance, they poured green paint over me and ran away. The guards saw that and did nothing.

I published a post about this, and a few journalists contacted me. Later, I was invited to a meeting with an OSCE representative to record a case of attack. I did not file a police report as I didn’t remember the attackers’ faces, and I did not have enough strength. For a long time, paranoid thoughts were not leaving me, it was scary to walk down the street, but I did not stop writing about it on social networks.

In June, I was invited to participate in the organization of the “We want, and we walk” street action. The purpose of the action was to draw attention to far-right violence and the way right-wing organizations restrict our right to peaceful assembly (disrupt actions and marches, attack activists) and the fact that political forces support them.

“No one could guarantee us safety at the event. Police can’t always be trusted.”

On the action, I was tied with white & red tape, which is usually used to limit entry to restricted areas. On the tape, there were slogans of right-wing radicals pronounced during attacks. My mouth was also tied with a ribbon as a symbol that they are trying to silence us. Just in case, I gave my spray to the guy who was next to me. No one could guarantee us safety at the event. Police can’t always be trusted.

I really hope that the change of power in Ukraine will entail personnel changes. And then, perhaps, at least some of these organizations will lose their funding and protection. I want them also to face criminal penalties for what they did. These are not only attacks on activists, but also, for example, arson attacks on Roma camps.

I don’t want to move anywhere. I like Kyiv. However, I want to work in astronautics, and we have no conditions for this. Both education and career in the space industry are in decay now. That’s why, probably, I will continue studies abroad where this area is more developed.

To states that are in similar positions, and to people who are fighting for their rights, I would say such a phrase as “Liberté, égalité, fraternité.” This phrase is wonderful. Inequality, chauvinism, racism also kill us. We should strive for freedom from any form of oppression.

The last thing I would like to share is my mood. I do not know what waits for me in my country, but I accept changes positively. We, Ukrainians, and all humankind still have to struggle a lot. And I am ready to continue fighting for what is important for me.